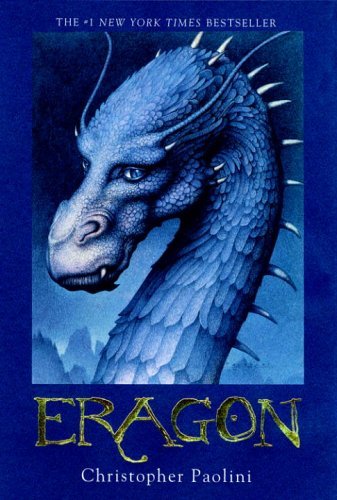 Title: Eragon
Author: Christopher Paolini
Release date: 2003
Rating: 5/5
Publisher: Alfred A. Knopf New York
Book Summary(Goodreads): Fifteen-year-old Eragon believes that he is merely a poor farm boy—until his destiny as a Dragon Rider is revealed. Gifted with only an ancient sword, a loyal dragon, and sage advice from an old storyteller, Eragon is soon swept into a dangerous tapestry of magic, glory, and power. Now his choices could save—or destroy—the Empire.
Review:
I. Loved. It.

It was a beautiful book about Dragon and Rider. I got hooked on the first sentence of the Prologue!

The way it starts is, the boy, Eragon, is out hunting for food for his family. He finds a rare blue stone--which is later said to be a dragon egg. During the night his "stone" starts moving and shaking then opens up revealing the blue hatchling Saphira. The connection is made there, when Eragon pets her and they become Dragon and Rider.

As soon as Saphira is old enough--and big enough!-- to fly they set out on a perilous journey to take revenge on the people who've killed Eragon's uncle. Then The Journey Begins.

I've been in love with dragons before this book and this one made me love them even more!

Magic, dragons, mysteries, and Dwarves! This book is amazing and highly recommend it :D It could be as a stand alone book or you can read its companion books ELDEST and BRISINGER.