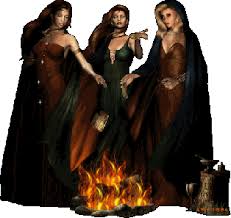 So, onto the post for today: Monster Profile: Witches.

Aren't all witches the kind that ride on broomsticks? Do they really eat little kids? Do they live in a candy house somewhere far into the forest? How did witches come about? Where do they originate from? All of those questions and more will be answered in today's post!
~M.A.Chase♥
AGAIN THIS IS RELIGIOUS, IF YOU DON'T WANT TO READ THIS SKIP THIS POST

Hundreds of years ago Christians, as well as many other religions, thought that the Devil could give powers to witches to harm others for loyalty. This wave of witchcraft and witchery started in the 1300s and ended in the late 1600s. Hundreds of thousands of witches (mostly women) were executed. Although the Salem Witch Trials had come when the situation was winding down, there was still much damage done.

On Febuary 29, under the pressure of magistrate, two women blamed three other woment for causing the episode, Tributa (the Paris' Carribean slave), Sarah Good (a homeless beggar), and Sarah Osborne (an elderly improvished woman).

All three women were brought before the court. They were interrogated for several days. Good and Osborne were both found innocent. Tributa, on the other hand, confessed that "the Devil came to me to bid me to serve him." She described different images of red cats, yellow birds and a "black man" who wanted her to sign his book. She admitted that she did and that other witches were planning to destroy the Puritans. All three women were sent to jail.

Accusations followed the next few months. Finally, on May 27, 1962 Bidget Bishop, an elderly woman who was known for her gossiping, was found guilty and the first to be hung on what is now called Gallows Hill.

Nearly 200 people in total were accused, 19 hung on Gallows Hill.


So there you have it.

Witches were thought to be people with powers given by the Devil.

Although, scientific studies say that it may have been a fungus grown on rye, wheat that only grows in hot climates which is Salem Village. Rye was used during the summer and winter months. What this fungi did was it could create hallucinations, vomiting, sickness, muscule spasms etc.

Maybe that's what's behind witches.
Posted by ~M.A.CHASE at 2:39 PM