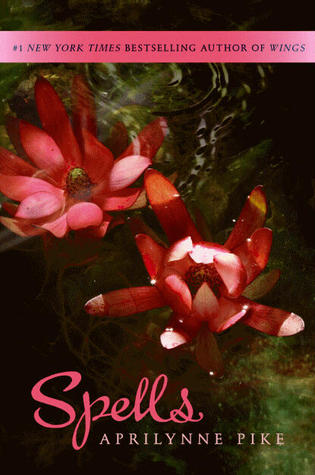 My late post, but here it is in it's new format.

Title: Spells
Publisher: Haperteen
Author: Aprilynn Pike
Rating: 5/5
Summary on back (or in this case inside cover) of the book: Although Laurel has come to accept her true identity as a faerie, she refuses to turn her back on her human life - and especially her boyfriend, David - to return to the faerie world.

But, when she is summond to Avalon, Laurel's feelings for the charismatic faerie sentry Tamini are undeniable. She is forced to make a choice - a choice that may break her heart.

In this compelling tale that is a companion to WINGS - that I will re-read and review - Aprilynn Pike shows Laurel's two worlds, the human side and the faerie side.

She returns to Avalon after so many years and stays to study for a few weeks. She studies 24/7 in order to get everything just right. She learns many different things like, potions and different uses for different plants, in order to protect herself against the trolls - most specifically, Barnes.

She later meets Klea whom she doesn't trust though she has saved Laurel's life...twice. But, who would trust someone who randomly shows up and is a monster slayer?

Laurel's journey of love and action is continued perfectly with this book. I highly suggest you pick this one up if you've read WINGS.

David and Tamini. What can I say about them...? I love Tamini. I don't know who David thinks he is getting all buff and...stuff. Tamini should've been with Laurel the whole time not David. Tamini has been Laurel's sentry for years and yet, David, whose only know her for, a year? thinks he can waltz in and just take her.

Tamini is sweet and caring. David annoys me, because he doesn't trust Laurel being alone with Tamini. What does David think Tamini's going to do? Erase her memory about him and have her stay in the faerie world? Tamini would never do that. He hated doing that even when her memory was already wiped.

Nothing happened between Tamini and Laurel when they were alone during the festival..well, except for the kiss =D. David should know, Tamini is a faerie on of her kind. But, no.. He has to make her life difficult and maker her choose.

RANT WITH SPOILERS OVER

I don't want to ruin the ending so I won't tell you who she chooses... She chooses Bob, yup Bob, because she hated David and just left him to be with Bob. Hehe, that really didn't happen, but a girl can have a laugh right?