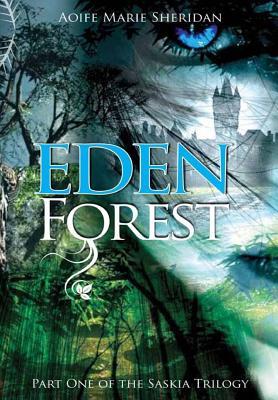 Sarajane Anderson is your regular twenty-one year old with family, friends and a normal job. She also happens to be the only person who can save Saskia, a parallel world to earth.

When Sarajane is taken to Saskia, she could never have imagined the reality of the world that she is stepping into- a world where magical abilities are in everyone's possession. She must face a father she never knew, a world that is beyond her belief, a guardian who captures her heart; and a darkness that wants to take it. On her journey, Sarajane discovers her magical abilities, and realizes too that they come with a price. Sarajane is truly tested as her own loved ones are put at risk- the ultimate question she is forced to ask herself is, how do you choose who lives and who dies?

I was really excited when I received the request to review this book. I love, love fantasy novels. They're my favorite to write and to read.

When I first started the novel, I was very, very confused. I had no idea what was going on. It took me a little bit to get used to the fact that the character in the prologue, Marta, is 25 years old. I kept confusing her as someone older. I have no idea why, because it's quite obvious that she's not older based on events that happen through the prologue.

Believe it or not, Queen Bellona was one of my favorite characters. She is the villain in this novel, and her character was amazing. I love well written villains (those include Maleficent (Sleeping Beauty), Valentine (The Mortal Instruments), and others), because I hate them while loving them. And to be honest, she didn't even try to get mixed into the things she got mixed into. While she was already terrible and evil to begin with (stealing souls to keep herself young as well as trying to find a way to keep herself immortal), Lucian forces her to join his destruction plan. And to this she's absolutely helpless.

Kiar and Neve were also characters that became my favorites. They were witty and enjoyable. They made me smile and when times were tough, they were great at cheering things up. ---SPOILERS-- It's been a while since I've cried after a character's death and Neve was about to be one of those characters that I cried for. To the end he protected Sarajane and never once questioned what he was doing for her. Kiar's pain was probably the worst to bare, however, because he was both blaming himself and Sarajane for what happened to Neve. --SPOILERS END--

Later on in the novel, we meet Mei a tiny adorable little girl that I fell in love with the minute she said hello to Sarajane. I won't reveal too much about Mei (I want you readers to get the full experience of her cuteness yourselves), but she reminded me of my little cousin. She was cute and tiny, and just all around adorable.

Eden Forest as a whole was very well written. Aside from my confusion during the prologue, there were beautiful scenes, and realistic and well-rounded characters. Saskia was a beautifully built world with its own lore and creation stories. I felt like it was a place that I could visit and see with my own eyes. --SLIGHT SPOILER?-- I do wonder: when Sarajane first escapes Tristan and Liber into the desert, does she feel as if a month has gone passed (one day on Saskia = one month on earth) when the day goes on, or does it just feel like one day? --SPOILERS END--

I look forward to seeing how Sarajane moves forward in the next installment of The Saskia Trilogy, and learning about how things are being handled back home since her entrance into Saskia. How is Josh faring? Has anyone else questioned her disappearance?

Thank you Aoife Marie Sheridan for allowing me to read your novel! It was unexpected and different. I look forward to hearing more from you.